'Green Zebra' has 4 heirloom-type tomatoes in the pedigree.

The first breeding line was between 'Evergreen' and a crack-resistant red. The hybrid was red to start with, but an improved green evolved by the F-5 filial generation. The other parent was a cross of a green-striped red tomato that was a mutant out of an old market variety of the 1940's, and another heirloom that Gleckler's seed company had in an old catalog of the 1950's. I had to reselect for the green stripe (red and yellow when ripe) until I had better crack resistance and flavor by the F-6 selection. The hybrid of these lines created a hybrid F-1 that was red, and no little or no stripes. Several generations of bulk harvesting of sister clones were evaluated repeatedly in the field followed by a generation in the greenhouse to get the tangiest green flesh with various levels of striping. The lines were in different groups of 5%, 10%, 60%, 80% striping intensities. I released the first seed in 1983 within my Tater-Mater Seed catalog, and the 60% striping level was called 'Green Zebra' at that time.


Editor's note:  Tom Wagner's business is breeding "heritage" type varieties of tomatoes and potatoes. He utilizes many heirlooms to develop a complex pedigree, and grows out over one hundred thousand seedlings and/or clones each year in potatoes alone. Most of his clones have either unique colors and flavors, or abilities to withstand pathogen/insect damage. He may be contacted at (425) 894-1123 at Tater-Mater Seed, 8407 18th Ave. West, 7-203, Everett, WA 98204. For additional information visit Tom Wagner's blog. 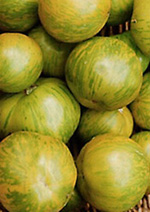